“I have a Digital Dream”- How IoT can Change India

How IoT can Change India :

It’s that Elections time of the year, and you’re remembering those days when you had to stand in a long line to cast your votes for your favourite party. But here you are in bed, its 8:59 AM, and the voting window opens at 9:00AM.

You sit upright and open a Government created app on your smart phone. The app quickly scans your face and asks for your fingerprint also-  another screen pops-up asking to cast your vote for your favorite party.

Then there is the question of security- What if someone ‘hacks your vote’? The IoT Voting terminals interacting with other IoT terminals would require encryption, the use of IPv6 in the communication model makes it mandate for the use of IPSec for securing the transmission. IPSec uses an Authentication Header (AH) or an Encapsulating Security Payload (ESP): used for authenticating the sender and the latter includes encapsulation.


The Internet of Things(IoT) refers to a network of objects, each of which have a unique IP address and can connect to the internet. These objects can be people, animals, and day-to-day devices such as your refrigerator or your coffee machine. These objects can connect to the internet (and to each other) and communicate with each other through this net, in ways which were never possible or have not been thought of before.

The IoT voting terminal was just one example of how an accurate voting system could increase the efficiency of a democratic government.  Other examples of IoT usage to improve the lives of the citizens of India could be a waste management system.

The local municipality could immediately be informed of waste/garbage over-accumulation at any location in the city which would have been picked up by sensors which detect the release of harmful toxins and odour released by garbage. These sensors being located at strategic locations around the city, would automatically send the location of the issue to the garbage truck’s GPS monitoring list of areas that the driver would then need to collect garbage from.


The old-age home that you pass by every day on your way to work will be installed with sensors which monitor the health and well-being of its occupants. In case of any emergency, the local hospitals will immediately be notified automatically via the sensors which should have already sent a message to the hospital via the internet -and an ambulance would be sent on an urgent basis.

We recently have seen news in the media regarding shortages of oxygen tanks in hospitals causing the deaths of many children.  This could also be avoided by IoT, where the necessary sensors/cameras automatically predict the shortages of oxygen tanks well before hand, and communicate the delivery requirements to the oxygen vendor.  This process eliminates the need of any human interaction which could cause delays/errors.

That daily Mumbai local train with hundreds of commuters will have its tracks loaded with sensors, which continually monitor their wear and tear. Even before the train hits its destination, the concerned department would know the repairs and the changes required. Similarly, they would not depend on the generic guidelines about the life of tracks to replace them. This could save the lives of many people as this would greatly help in deterring an unforeseen accident.  This concept also applies to aircraft engines, wind turbines or any heavy machinery you can think of.


Eric Schmidt & Jared Cohen, in their book “The New Digital Age” describe a typical future morning for a professional like this:

“There will be no alarm in your wake-up routine – at least, not in the traditional sense. Instead, you’ll be roused by the aroma of freshly brewed coffee, by light entering your room as curtains open automatically, and by a gentle massage administered by your high-tech bed. You’re most likely to awake refreshed, because inside your mattress there’s a special sensor that monitors your sleeping rhythms, determining precisely when to wake so as not to interrupt a REM cycle.”

“There’s a bit of time left before you need to leave for work – which you’ll get to by driverless car, of course. Your car knows what time you need to be in the office each morning based on your calendar and, after factoring in traffic data, it communicates with your wristwatch to give you a sixty-minute countdown to when you need to leave the house.”

The possibilities of how IoT can change our lives are limitless.  The only thing stopping us from advancing to this next level of technology as quickly as possible is us.  We will need to create the necessary infrastructure, funding, and mindset to accept these upgrades in our lives.  The different ministries involved in our government will need to come up with such budgets, and probably start with “smart-cities” first before moving to change the whole nation. 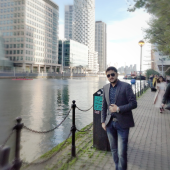 Omar Lari was born in May 1983 in Ethiopia, East Africa. He completed his Master’s degree in Computer Science from Delhi, and has worked with Several MNCs both in India and Singapore. He is currently employed in an IT company in Noida which deals particularly in the Internet of Things (IoT) domain. Omar is a visionary in his field, and is always very enthusiastic to learn new things in the IT world. He loves travelling and reading.

How IoT is revolutionizing the education and Learning sector

What is Smart Supply Chain? and Its Importance for organizations